The capital of India, Delhi ,offers rich ancient heritage culture, art and modern architecture and you will be also overwhelmed by it’s cuisine and market places. It’s an attraction to thousands of tourists with its bewildering natural scenic sites and never ending development.
One of the famous historical location The India Gate , one of the oldest masjids – Jama Masjid, the famous Red Fort, the tall minaret called Qutub Minar, and the list goes on. In addition to the ancient architectural structures,you would also find metro system, temples,gardens etc linving you in awe state. India Gate,established by British in the honor of the Indian soldiers who died fighting for them in World War I.It’s considered to be one of the most favourite tourist locations in Delhi.This monument embellishes the capital, which is almost 90 years old. . This construction has made it’s place in the centre of the city.Throughout the day,people visit this location to spend time and enjoy the architecture and the replenishing nature surrounding it .The monument has the names of the martyred soldiers carved on the stone.It’s a great idea to spend your evening there with your beloved ones with beautiful lawns and gardens filling your atmosphere. Qutub Minar,one of the top tourist spots on tourist’s mind when it comes to Delhi.It’s India’s second tallest tower with a height of 72.5 m, making it the tallest minaret in the world.The tower was constructed using marble and red sandstone.Furthermore,It is considered a UNESCO World Heritage Site.Qutub minar is a symbol of victory ,considered as the sign of the Delhi Sultanate. In Mughal Era, “Meena Bazars” were held for women to enjoy shopping which took place during 5 – 8 days of Norouz or New Year festival.This bazar extends from Netaji Marg to the Jama Masjid showscasing it’s frontal part. It skirts past the garden-mausoleum of freedom fighter Maulana Abul Kalam Azad.As the name suggests,it mostly sells commodities a women would watch for .The stuff on pavement stalls includes home decoration Jewelry, traditional crockery, carpets and art pieces ,hand woven bed sheets, Pashmina shawls,silver ware, handicrafts and handprinted cotton and many other commodities.It’s a long list of items that would cover a considrable amount of space here.It’s considered as one of the oldest functional markets in the world. 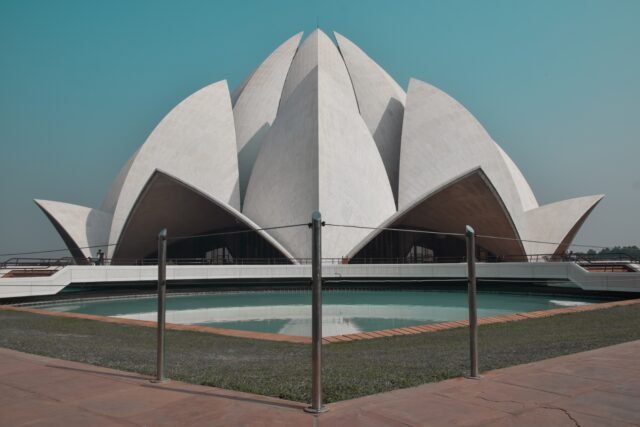 Bahá’í House of Worship, popularly known as the Lotus Temple located in New Delhi, India.The temple is the ninth temple of the Houses of Worship around the world, and similar to other houses of worship this magnificent structure stands for the principle of the oneness of humankind.It proves this by allowing people of all racial, religious, national backgrounds with no discrimination are welcomed to pray and meditate .Note that unlike most other places of worship,Bahai House of Worship does not allow ritualistic ceremonies and fixed pattern of worship.People interested in biology should consider visiting here to study indigenous plants and flowers at it’s greenhouse.